Actor Kunal Kemmu is celebrating his 39th birthday today. As the talented actor celebrates his birthday while biking his way across the European countryside, his colleagues in B-Town took to their social media handles to wish him. Shahid Kapoor, Ishaan Khatter, Vicky Kaushal and Kareena Kapoor Khan all dedicated their Instagram stories with the most adorable photos with Kemmu.

Jersey star Shahid Kapoor posted a photo with Kemmu featuring the duo in sunglasses as they stared somberly at the camera. Kapoor wrote, “Happy Birthday my posing partner, Love you bhai.”

Ishaan Khatter also put up an Instagram story and posted a photo featuring him holding Kemmu as he tried to walk away somewhere. He wrote a note saying, “Happy Birthday bhamaiiii, have a cracking year!! This picture defines our relationship.” Kareena Kapoor Khan posted a white and black photo of her and Kunal hugging. She captioned her story, “Happy Birthday to my dearest brother-in-law, love you lots.” Kunal is married to Saif Ali Khan’s sister Soha Ali Khan. 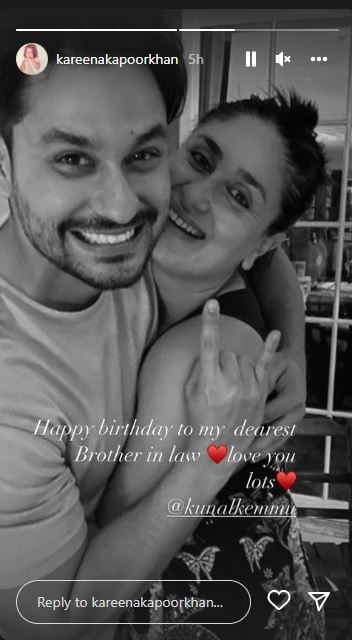 Kunal Kemmu is currently on a biking trip with his pals, Shahid Kapoor and Ishaan Khatter. The group have been posting photos and videos of their biking journey as they ride and take in the sites of Europe’s aesthetic countryside. Kunal Kemmu posted a photo from 2019 featuring a happy moment in which the same group were smiling for the camera. Captioning the photo, Kunal wrote, “2022 and 2019. Boys in the hood, looking good.”

See also  Not Shah Rukh Khan, but THIS other Khan was the first choice for Dilwale Dulhania Le Jayenge

Kunal Kemmu’s acting journey started when he was only five years old. He made his debut as a child actor in the Doordarshan TV series Gul Gulshan Gulfaam. In 1993, a young Kemmu made his Bollywood debut with Mahesh Bhatt’s film Sir. Kemmu then went on a streak of box office hits with films like Raja Hindustani, Hum Hain Rahi Pyar Ke, Zakhm, Bhai and Dushman, as a child artist. An adult Kemmu got his breakthrough performance in 2005 with the film, Kalyug. Since then, Kemmu has been part of projects like Dhol, 99, Golmaal 3, Go Goa Gone, Golmaal Again, Kalank, Malang and Lootcase.

On the work front, Kunal Kemmu last appeared on the ZEE5 series Abhay’s third season. He will be seen next in Kanjoos Makkhichoos and Malang 2.

9 Childhood Pictures Of Creators That Literally Made Us Go “Aww, So Cute!”